I can't believe it's been a year since I really last blogged.  Talk about SLACKER!  But really I can explain...

In January my grandmother, Emma Ruth, passed away.  For you loyal readers, you may remember I've written about her several times. She was 93 1/2 & lived a wonderful life, but she was ready to go. She was missing the love of her life & all her friends. 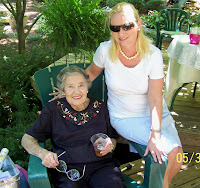 The day of the funeral I woke up with a bloodshot eye, I just assumed it was irritated from all the crying, but it got progressively worse.  By that evening, I was at the med stop (where I was misdiagnosed with something I can't remember), the next day I was at the eye doctor where I was correctly diagnosed with Atopic Keratoconjunctivitis, a relatively uncommon but potentially blinding ocular condition.  Yeah. You read that right, potentially BLINDING.  I was treated with strong steroids which caused this... 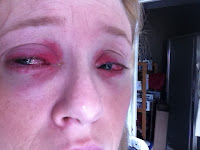 I was out of commission for over a month, going to the doctor, in the beginning twice a week.  My eyes still aren't right, but I can see, even without my glasses. They just water a lot & eye makeup just aggravates it. I've started having to get my eyelashes tinted.

After all that drama, Retro finally got us a pool.  Emma Ruth had always told me I could get one with my inheritance, but the one he paid for was lots nicer that the plain Jane one I would have bankrolled!

We also built a deck & outdoor kitchen.  The whole deal was a major production. And I LOVE it all!!!
But for some reason (this crappy computer) I can't find a good picture of the finished product, but here's my too cool bed swing!

Retro's sister got married at the end of April & the whole Semi-Slacker fam was in the wedding.  We even hosted the rehearsal dinner in the new addition!  Thankfully everything was finally completed. The wedding went off without a hitch.  All of the children were on their best behavior, with the exception of the fact that Sassy got choked on a piece of London Broil at the reception.  Retro had to do the Heimlich!  Always some drama!!!

At the end of May, I had a tummy tuck & breast lift, also a promise from Emma Ruth.  I had originally just planned on the boob lift because these girls have never stood up, but my momma & BFF told me I wouldn't be happy with perky boobs & a saggy stomach so...  Let me go on record & say I was totally scared of the tummy tuck but it was no where near as bad as I thought.

I know y'all want to see a picture of my new bod, but I'm not that vain. At least not today...

In June, the children & I went to St. George Island with my parents & my aunt & uncle.

In July, Retro & I went to Ormand Beach with several friends.

And the beginning of August, Retro & I went to Mexico Beach for the weekend, while my in-laws took the children to Rock City & Ruby Falls.  But I can't find those pictures on here either!

And just to spread the Semi-Slacker's love of drama, Retro got bit by a rattlesnake in March thus causing vein reflux (which will be repaired next month), Bo got a stomach bug & spend several hours in the doctor's office hooked up to an IV & Baby Girl spent several hours in the ER for a fever due to a UTI (there's a story behind that one, but I'm not even going there.

I need to know what you're thinking. I'm nosey like that!